A tale of two bridges 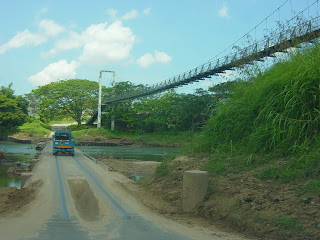 Tamparuli is like one of the many smaller towns around Sabah. It started as a small settlement where traders and indigenous farmers meet regularly at the tamu to barter trade goods. A township evolved as shops and markets were built in the area.
It is also the last town travellers heading up to the Kundasang highlands or to Kiulu, now known as one of the white water rafting sites in Sabah.
Coming back to the bridges. Other Sabah bloggers have written about these structures, among the most informative is this piece by Ben Godomon.
This is my take on the low lying bridge. I was talking to an Englishman who had worked in Sabah many years ago. He was talking about the low lying bridge and said "only an Irishman could design something like that."
I asked him why he said that and his reply was that only a person of Irish descent would design a bridge that was impassable after a heavy downpour due to floods.
It was interesting to see the disdain some Englishmen have for their Irish counterparts reaching a small town in Borneo
Posted by Ruben Sario at 6:54 AM 1 comment: