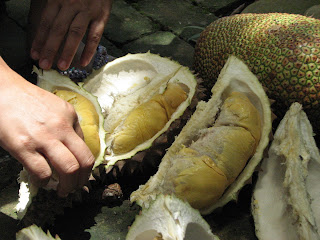 Often described as the king of fruits, aficionados will not hesitate to pay a princely sum for a durian. I've seen people forking out as up to RM17 per kg (working out to nearly RM40 per fruit) just for the ones that taste 'bitter sweet'.
However, more often than not,the king of fruit will have to be consumed at humble surroundings, usually along a road side, under the shade of a large tree as hotels and other businesses ban them due to their overpowering?odour.
An American has described the smell of the durian as something akin to a pair of very well used socks.
So much for respect for the king of fruit.
Posted by Ruben Sario at 8:56 AM