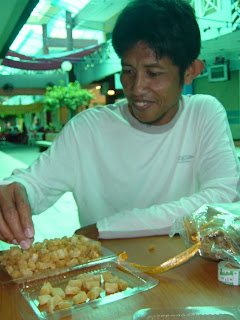 Meet Ahmad Jais Inil. He wants to capitalise on Sabah's reputation as a seafood paradise.

Those sitting in Sabah coffee shops would have likely experienced 'mobile vendors' hawking everything from pirated DVD movies to Brietling, Omega andRolex watches to sunglasses to wallets and belts.

Ahmad was taking the same business approach but his wares were dried scallops, sotong (cuttlefish) and sea cucumber. I bumped into him as he was replenishing his stocks at a coffeeshop near my office where he was packing some dried scallops that he would sell at about RM30 per kilogramme.

An electrician by profession, Jamil has laid wires and cables in office complexes in Singapore and Kuala Lumpur. But he gave it up to get to started in the seafood business.

So much for capitalising on a good thing.
Posted by Ruben Sario at 2:19 AM

err... maybe i can have him supply me that stuff when i open my e-bay store. heh heh, just kidding.

i think i seen this pix b4, where is the pix of that fellow (the most handsome guy in Lintas) buying from him ah?

Jack: Good idea on that ebay store. It's just mind boggling to see what is available there.

northborneo: hey, as the saying goes, better late than never. and about that guy who claims to be the most handsome in lintas; muahahahahahahahahahaha!!!!