An example of globalisation. 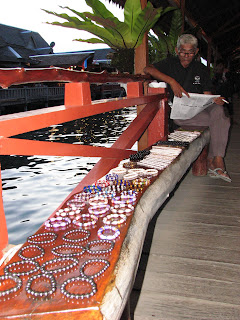 On a recent trip to the east coast district of Semporna, I met this gentleman who was patiently waiting for customers as he used a bench at the walkway of the Dragon Inn hotel and restaurant to display his wares comprising largely cultured pearl necklaces and bracelets.
After taking his picture, we chatted and he introduced himself as Arshad and he cheerfully acknowledged that his wares were brought in from "sebelah" (the other side, i.e southern Philippines).
Arshad will probably tell gullible tourists that the pearls orginated from Sabah. Already cheaper handicrafts from the Philippines, Indonesia and even Thailand make up the bulk of goods at souvenir shops in Kota Kinabalu and other tourist hotspots in Sabah.
Part of the problem is that Sabahan craftsmen are contented to continue to produce the things they know such beadware, woven baskets and traditional fabric like the Bajau dastar.
Then again maybe the situation is not that bad as tourists will likely find a mini replica of Big Ben in London with a 'Made in China' sticker on it.
So much for globalisation.
Posted by Ruben Sario at 1:42 AM