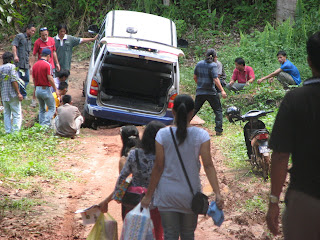 First time visitors are often taken aback by the sheer number of four-wheel-drive vehicles in Sabah. It seems that every other vehicle in this state has some off-road capability.
From the demure Suzuki and Perodua Kembara vehicles to the full scale Toyota Land Cruisers and Range Rovers as well as Hilux, Ford Ranger and Isuzu DMax, these vehicles indeed have a prominant presence on Sabah roads.
A reason for this is that though most Sabah towns are linked by proper roads, routes to numerous villages are still nothing more earthern tracks that transform into a muddy patches after a short spell of rain.
Such was the condition of the road leading to Kampung Kouvosian near the interior Keningau district when driver of this van tried to negotiate a wooden bridge with vehicle slipping off the simple structure.
Dozens of villagers lent a hand and together with the pulling power of a Ford Ranger, they managed to pull the van out of its predicament.
Posted by Ruben Sario at 12:08 AM

was that your ranger?

i guess as much.. a red ford ranger.

hey, i kind of miss the muddy trail of sabah, particularly the one leading up to kampung gana!

Kampung Kovosian. Kovosian in Kadazandusun is something good/better/nice/beauty but that road leading to that village in Keningau is otherwise. And of bad roads, one need no go far to the interior. Within Kota Kinabalu City's villages, the roads are good for `Camel Challenge' or dare-devils motorists. Jalan Menggatal-Kokol-Bambangan Baru-Poring Poring, Jalan Kiambalang - Kionsom Kecil, Jalan Sokuan, Jalan Kiapad, Jalan Kawakaan to name a few. YB Johnny Goh is fully aware of this and had in fact `lulus' allocation for some but years passed no development. This earned him a new name `YB Lulus' by the orang kampung.

its nice to see your blog reactivated again, no wonder you been busy, you seemed to be travelling to all nooks and corners of the state.

jack: those muddy trails will still be there for a long long time to come.
jaybee: it's sad but a fact of life that as far as politicians are concerned, what is said and what is done are very often very different things. sigh...
kong: thanks. it's more like getting into the blogging groove again.