An ode to my favourite landmark 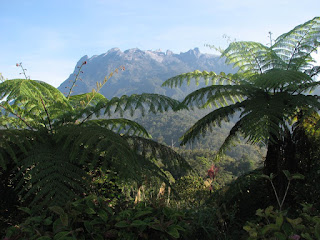 The Borneo people awake at sunrise to an evaporating dew revealing a sacred mountain that is the highest in Southeast Asia.
To point to the majestic Mount Kinabalu sprouting out of the largest island in the world is sacrilegious.
That act prompted a slap for the cousin of Datuk Masidi Manjun from his grandfather. It is a memory etched in the mind of Masidi. He vividly remembers that day in the 1950s when he saw his grandfather slapping a cousin.
His cousin had accidentally pointed to the 4,095m mountain with his index finger and the reprimand came hard to cheek from the hands of an elder Dusun whose life is living under the shadow of the mountain until his death.
``Pointing your finger to the mountain was a big no-no for us Kadazandusuns. There was just one of the pantang (taboos) we learnt and abided to,'' said Masidi who grow up at Kampung Tarlobou, some 15kms from the mountain.
For generations, the Kadazandusuns farming the steep slopes of the foothills revered the mountain and they continued to do so after converting to Christianity or Islam as in the case of Masidi's forefathers.
Masidi, a lawyer and now the state Youth and Sports, said as children growing up literally in the shadow of the mountain he and his siblings learnt about how Kinabalu affected their Kadazandusun psyche.
``We grew up listening to numerous myths and legends about the mountain. For instance, as children we my grandparents told us how the souls of Dusun people would travel through Kinabalu to enter the next world.
He this myth was reinforced with a unique rock formation at village called Purak Pakau near Tamparuli, a town on the on way to the Kundasang highlands near Kinabalu.
``The rocks there had etchings like scratch marks and as children we were told these were made by the souls clambering their way to the mountain,'' Masidi said in recalling his grandparents telling about that Kinabalu was the weight that kept the world from spinning out of control.
``The underlying message there was that we should not play the fool with the mountain. It is one of things in creation that keeps a balance in the world,'' said Masidi, sighing and wondering about the seemingly "uncontrolled" development of mainly vegetable farms and resorts that have been mushrooming in the highlands of Kundasang over the past 20 years.
However very little changed within the immediate vicinity of the mountain with the creation of the Kinabalu Park nearly half a century ago.
The 754sq Kinabalu Park, about one a half times the size of Penang island, surrounds the mountain serving as buffer with areas outside which have been cleared for farming.
In 1964, the Kinabalu Park came into being to preserve the mountain's unique environment with its flora and fauna spread out over four climate zones from the lowland dipterocarp forest to the stunted bushes at the windswept summit zone.
The mountain and the park is home to 1,200 species of orchids, 26 varieties of rhododendrons, nine species of Nepenthes pitcher plants, 80 species of fig trees, 60 species of oak and chestnut trees, 100 species of mammals and 326 species of birds.
The preservation efforts of Mount Kinabalu and its immediate vicinity paid off in 2000 when UNESCO designated Kinabalu Park as Malaysia's first World Heritage site.
Located about a two hour's drive from Kota Kinabalu, each year Kinabalu Park attracts hundreds of thousands of visitors who savour the clean, cool invigorating air.
In 2004, some 415,360 people came to the park and 43,430 of them spent two days trekking to the Kinabalu's Low's Peak, the highest point between the Himalayas and the Snow Mountains of Papua Barat.
Once a year though, top athletes race up and down the mountain in just about two hours in the Kinabalu. The Mount Kinabalu International Climbathon that began more than 20 years ago as a search and rescue exercise for park rangers, mountain guides and porters, is usually held every the first week of every October.
The Kinabalu Park also encompasses the Poring Hot Springs, located 40kms from the park headquarters. For nearly three dacades, the hot sulphur springs combined with cool mountain water have attracted visitors for who spend hours soaking in the open air Japanese-style baths.
Apart from the springs, visitors to Poring may also encounter a blooming Rafflesia, the world's largest flower apart from walking or rather swaying through a 158km-long treetop canopy located among the trees about 41m from the ground.
Tours to Borneo's highest peak are available from any part of the world and the foothill indigenous Dusun people are always there to tell the many legends of Mt Kinabalu.
(First published in The Star, January 2007)