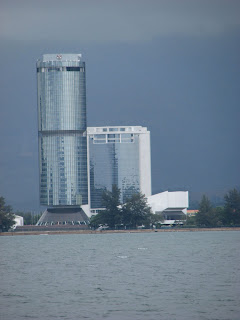 This is a view of the cyclindrical shaped Yayasan Sabah and Wisma Innoprise buildings from the scenic Likas Bay. The Yayasan building used to house the Sabah Chief Minister's office that has since moved to Wisma Innoprise.
In recent days, a decision from the Chief Minister's office is raising eyebrows even among ministers and assistant ministers.
Even as the new minister took his oath of office at the Istana Negri, the whispers among those present was whether the Chief Minister really looked into his background.
A check with the police for example might have revealed whether the new minister was a subject of a criminal probe a year or two ago.
And those probably among the most surprised over the appointment were the people from the new minister's hometown of Tawau. They know him for who he is.
But this is Sabah. Anything is possible.
Negri Sabah. Negri Aman.
Posted by Ruben Sario at 4:05 AM