Of rivers and monkeys. 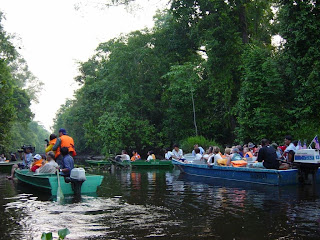 This is a typical afternoon scene at Sungai Menanggul, a tributary of the massive 484km long Sungai Kinabatangan in Sabah's east coast.

From 4pm, boats laden with tourists head up the waterway in search of the golden coloured long-nosed proboscis monkeys that perch on trees along the riverbank.

Most of the boats are manned by the Sungei indigenous community villagers from the nearby Kampung Sukau. The standing joke among them is that there are usually more monkeys in the boats that in the trees. I wonder then who's watching whom?